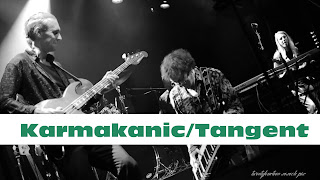 Karmakanic/Tangent, Support Us!!! Pre-Order the upcoming live CD
Hello everybody,

I´m very pleased to present the next Karmakanic/Tangent output. It will be a live CD from the upcoming European/US tour this fall. To be released Jan 2018.

So let me start bitching about this even before the tour has started and nothing is recorded yet. Why? That's a valid question and I will try to answer it to the best of my knowledge.

We lost a well payed gig in Boston that was one of the anchor gigs to finance this tour. We run into totally overpriced VISA application costs. Do you know how much a application cost for a band like us? 2500 US dollars, just to get in. Then add flights, accommodation, hiring a van, gas, hiring a rehearsal room, paying salary for the band members, domestic travels prior the rehearsals and all other little things that I´ve forgotten right now and you´ll probably understand that the numbers are totally in the red.

So why even think of doing this? Why just not cut the whining and throw this project right out of the window? I´ll try to answer that too.

To run a band is probably the worst business idea you can have. No money coming in a lot of money going out, poor attendance, over the years I´ve also felt lack of support from band members, although, with the current line up I´ve never heard a bad word, yet. And you all know how to make a musician complain don't ya??? Give him a gig!! But even though with all this in consideration you do it anyway. Why?????

I also love the people that actually supporting the scene, buying the albums and are attending the shows. That means the world to me. To see a person actually getting moved by something you wrote or played on a recording in a shabby studio somewhere when presented on a stage in another shabby and funky club somewhere in the world is the actually payment for all the hassle, you feel connected, you´re part of something bigger.

So that's why we, Tangent and Karmakanic reaching out to you guys and giving you all a chance to support this tour but also even more important, support the scene. You can support the tour in two different ways.

Option 1: Pre-Order this live recording just like a normal CD for 15:95 Euro

And of course, if you think that this tour support is just a big chunk of bogus we´re totally fine with that as long as you attend one of this shows on the upcoming tour.
Sincerely