After making waves in the metal guitar community in 2011 with his debut album Assimilate Regenerate, and fresh take on instrumental guitar music, Paul Wardingham will release his 4th completely self-produced instrumental solo album Electromancer in 2018 on Enigmatic Records.

"Electromancer is a totally self-indulgent, cyberpunk movie inspired, synthesizer infused, futuristic shred-fest, that brings together my favourite music genres: metal and electronic music, closer than ever before! I can’t wait for people to hear it and see the reaction.”

Like Wardingham’s sophomore effort The Human Affliction, Electromancer is a concept album inspired by an original story set on Earth in the year 2217.

“The story follows 'Electromancer' a cyborg anti-hero and his biomech protector called 'MX-106' as they evade enemies and authorities to get to Mars with the 'Cyber Drive'. The 'Cyber Drive' is a weapon that could be used to destroy life on either Earth or Mars, both of whom are on the verge of war. My previous albums have been inspired by technology and the affect it has on us right now and in the future, but Electromancer is pure fantasy! I wholeheartedly embraced my inner sci-fi nerd on this album.”

Electromancer features stunning cover artwork by Light The Torch (ex-Devil You Know) and former All Shall Perish guitarist Francesco Artusato.

“The Human Affliction story was character based, but nobody got to meet those characters. This time I wanted the characters to be at the forefront of the visual aspect of the album. As a fan of Francesco’s music I was amazed when I came across his artwork on instagram. He liked my concept, and we started throwing ideas back and forth. He absolutely nailed the vision I had for the artwork and then took it to another level.”

Electromancer is set for release March 12th 2018 on Enigmatic Records. 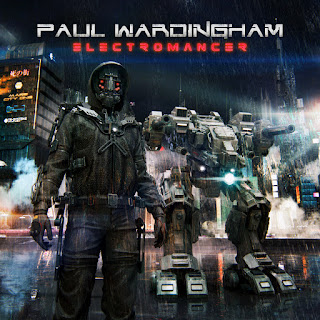