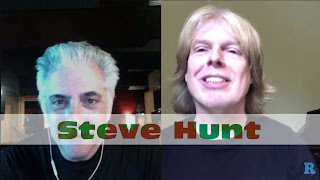 My guest on today's SOUNDING OFF is American jazz pianist and composer Steve Hunt. From 1987 to 2003, Steve performed, toured, and recorded as a member of Allan Holdsworth's band. Several of his compositions appear on Holdsworth's albums. On Secrets (1989), Hunt is credited with composing "Maid Marion", and "Joshua". On Wardenclyffe Tower (1992), he did "Dodgy Boat". On Hard Hat Area, he helped to write "Prelude" and "Postlude". On the album Then!, which was recorded live in Japan, he helped with "Zone I", "Zone II", and "Zone III". Tracks from these albums are included in the compilation The Best of Allan Holdsworth: Against the Clock.